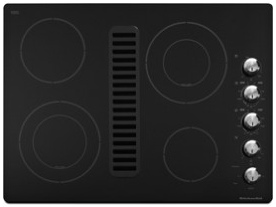 Black is an absence of all colors. Black gets out of the way and lets other elements or events take prominence. Yet it can also have a very powerful presence. It’s a conundrum, which makes it appealing. It is complexity and contradiction personified.

I believe that the use of black hearkens back to our formative years in architecture school. When architects begin their career, they start by sketching with a black pencil on a blank sheet of paper. This restricts the thought process to basic elements of shape, form, contrast, value and shading which are more than enough to deal with initially. Later on, more elements are added to the mix, but the basic foundation is always present.

Black furniture is neutral. Depending on the item, it can have a high visual impact or it can be relegated to the background. Black audio speakers psychologically help them to “disappear”, which is what I want when listening to music. I want to concentrate on the music and the manifestation of the instruments in the room rather than on the speakers.

It’s much easier to ignore black loudspeakers than red loudspeakers, for instance, even in a dimly lit room.

Compatibility and elegance are primary reasons for selecting black consumer products. Seldom does one grow weary of a black phone, for instance. A black car gives the impression of solidity, prominence, and a driver that knows exactly who he is and what he wants.

Black is compatible with almost any color. It even goes with black. So any color (except some shades of brown) pants can be worn with a black shirt, or any color shirt (except some shades of brown) can be worn with black pants. Color coordination is a “no-brainer”. A little black dress can be worn almost anywhere. Steve Jobs always wore a black turtleneck shirt for his presentations. His clothes neutralized his body as a presence and allowed the audience to focus on his art and not on him. It’s also the easiest choice to make in the morning when selecting attire.

Some could argue that black, then, seems to be used to avoid making a commitment. But selecting black instead of selecting a “color” is actually making a very bold statement.

It’s also the color of solemnity and mourning. So it must be used wisely, lest something appear completely inappropriate. A black hearst seems completely natural, yet a black house would probably appear quite eccentric.

An architect is the pencil on the canvas of the city.