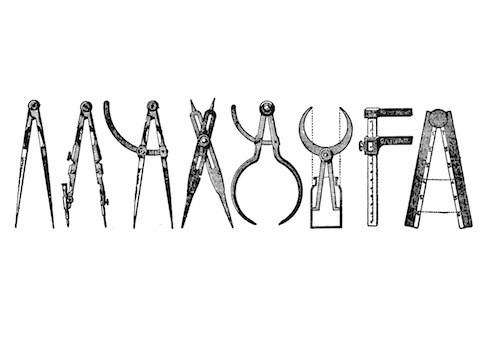 This illustration is useful as a relatively simple representation of pure design. It contains many elements that dbaArchitects use in design:

Pattern: The elements set up a pattern (of two “legs”) and then break it. The two legs don’t need to be parts of a compass but just design elements.
Humor: The compasses seem to be dancing or, at least, posing.
The sum is more than the whole of its parts: The pieces come together and represent a chorus line or something similar to letters in a word.
Simplicity: The elements are all very simple: black and white images, forms of two or three elements each, similar scale items.
Complexity: Taken together they become some kind of prickly-rounded-sliding-hinging assembly.
Repetition: Individual elements gain justification by repetition.
Engagement: It almost looks like the compasses are letters, spelling out a word. The design tempts you to study it. You are drawn in.
Historical Reference: Drafting tools of days gone by is appropriate for a site about architecture, which, at its most basic, started with very simple hand drafting tools.
Consistency: The elements all functioned in a similar manner: they are hand-held human-scaled tools. All seem to be of the same “family”.
Functionality: The compasses are tools.
Pleasing Aesthetics: The last element is quite subjetive, but I can safely say that the design as a whole is pleasing to the eye.